During last week we had an AWS BugBust re:Invent Challenge from November 29 to December 2 dedicated to fix bugs for the exclusive rewards and a cash prize of 1,500$. Main goal of this challenge was to set the Guinness World Records for the largest bug fixing challenge. Before that such event was only possible to be run internally by organizations who wanted to reduce the number of code bugs and the impact they have on their external customers.

We are very proud with the results of our Accenture DevOps team. One of our team members took 20th rank out of 611 developers in the leaderboard.

Our DevOps Engineer Jaroslavs Rogacs has prepared his review of the event and there you can find tips and tricks how to achieve such great results.

This Challenge is open to all developers who have Python or Java knowledge regardless of whether or not they’re attending main re:Invent. There are an array of prizes, available to all who participate and meet certain milestones in the challenge.

As part of this challenge, AWS will be including a myriad of open source projects that developers will be able to patch and contribute to throughout the event. Bugs can range from security issues, to duplicate code, to resource leaks and more. Once each bug has been submitted and CodeGuru determines that the issue is resolved, all of the patched software will be released back to the open source projects so that everyone can benefit from the combined efforts to squash software bugs.

There are some rules for BugBust participation.

By earning the points for the bugs fixed you can receive some prizes for your achievements + a certificate from AWS and Guinness World Records. 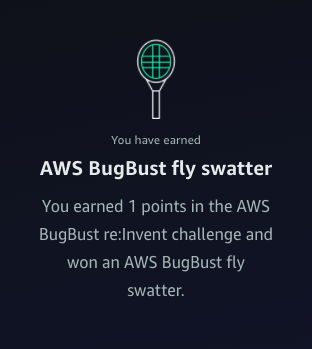 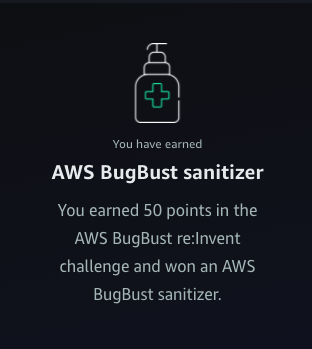 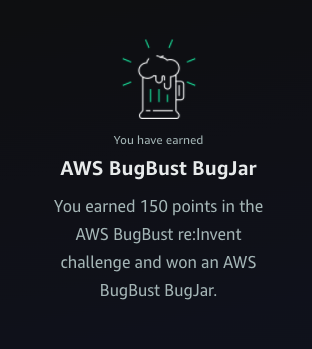 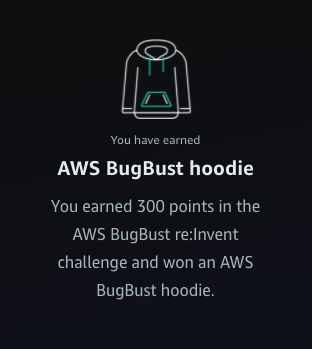 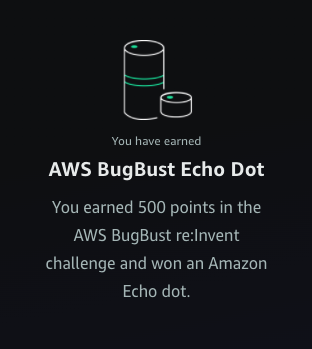 And the main prize for the 1st rank in the leaderboard:

I’ve started my journey during the second day when there are already about 200 developers running for their prizes. In the beginning I was little skeptical about how could I earn so many points as other guys in the leaderboard already have about 200-300 points. The categories, severity and points for the bugs were:

In the past I was a Java Developer and decided to jump into Java bugs that are familiar for me… I took few 5-point bugs, checked the description of what need to be done and started to clone huge repositories into my workstation and refactor as requested – it was a bad idea – few thousands lines of code checking for needed ones, meaningful pull request and 10-15 minutes waiting for the message: “No Fix Detected”… waaat???!?! First day (spent 3 hours) ended with 15 points. But okay, I can wish only a sanitizer (50 points) using this strategy.

Next day I decided to change the way I am working.

So the changes introduced to my strategy:

With this strategy I got about 50-60 points and everything changed until I found this cute 5-point bug 👌🏻: 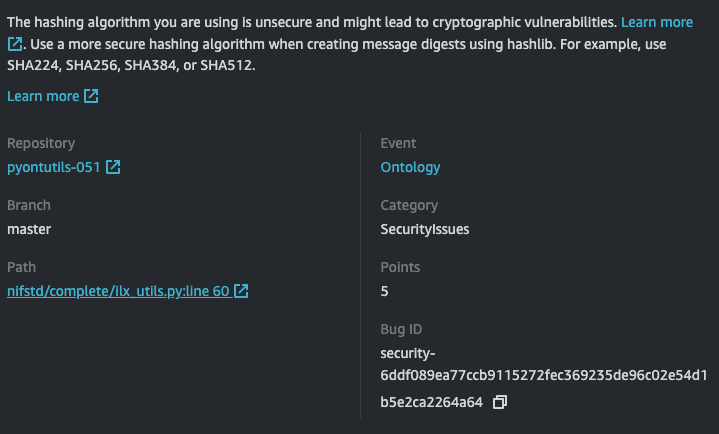 I started to receive the flashbacks of my past experience with Python hashlib library and started to mine the points 😏 I claimed all 5-point bugs with the same description. The changes are just few lines of code (like everywhere during this BugBust Challenge):

At this point I understood that there are no complicated bugs at all – you just need to know what are you doing to increase security, remove resource leaks and increase the performance, so no changes to the logic or something else. I got almost 140 points fixing 5-point Python bugs – BugJar is in my pocket 😏

So I updated my strategy and started to mine the points.

Some 5-point Python and Java bugs that are left:

We have new changes to our concept:

Main challenge here that most of 5-point bugs have already been taken by the leaders from Day 1, so let’s take the crumbs from the table – 3-point bugs. When I’ve finished with 5-point bugs I started to sanitise 3-point bugs cause the complexity are the same. But sometimes 5-point bugs appeared cause others did not fix them in time (5 hours period).

Some 3-point Python and Java bugs:

I’ve started to mine the points in chill-mode to receive 500 points achievement and my prize: Amazon Echo Dot – I don’t know what is that but sounds interesting

During this day I had a clear strategy and sometimes 5-point and 3-point bugs appeared, but I did not forget about 1-point bugs… so I personally stopped this challenge with 606 points – 4h spent in chill mode, all achievable prizes are in my pocket and I had 15th rank, but still 7h left till the challenge closes – so my rank dropped to 20th in the end.

The achievement of this challenge is great of how many bugs got fixed and how many $$$ saved by 611 developers. 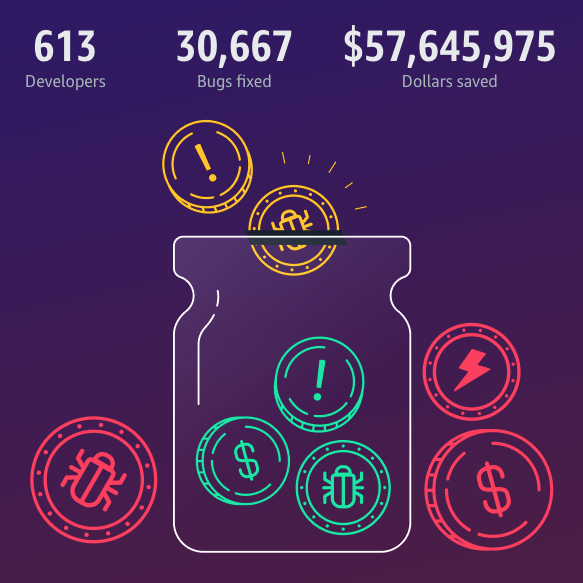 Here you can see all stats and achievements from my side. ~13 hours spent, 308 bugs busted in total, 606 Points scored in 14 Events (Bugs Categories), 12 Achievements. 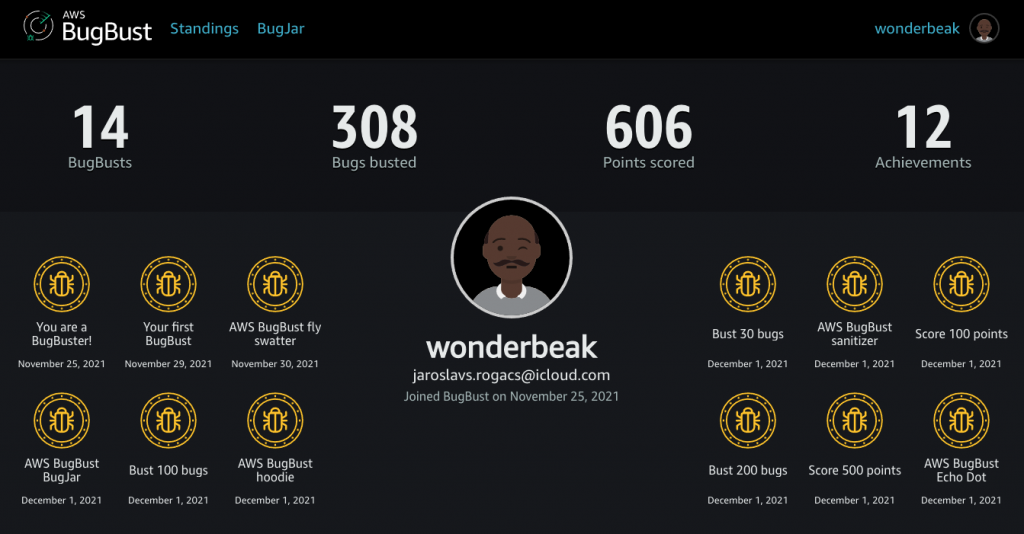 During last 4 hours I was occasionally watching how this 2 developers danielsoft and StevenVu are going to achieve their goal for the first place – 1500$ in a cash. Most interesting thing is that when I’ve stopped the challenge StevenVu had a 1st place with ~1990 points, but danielsoft was 2nd with ~1940 points. I suppose that StevenVu fell asleep 😴 cause all days was mining this points without any relax. 😳 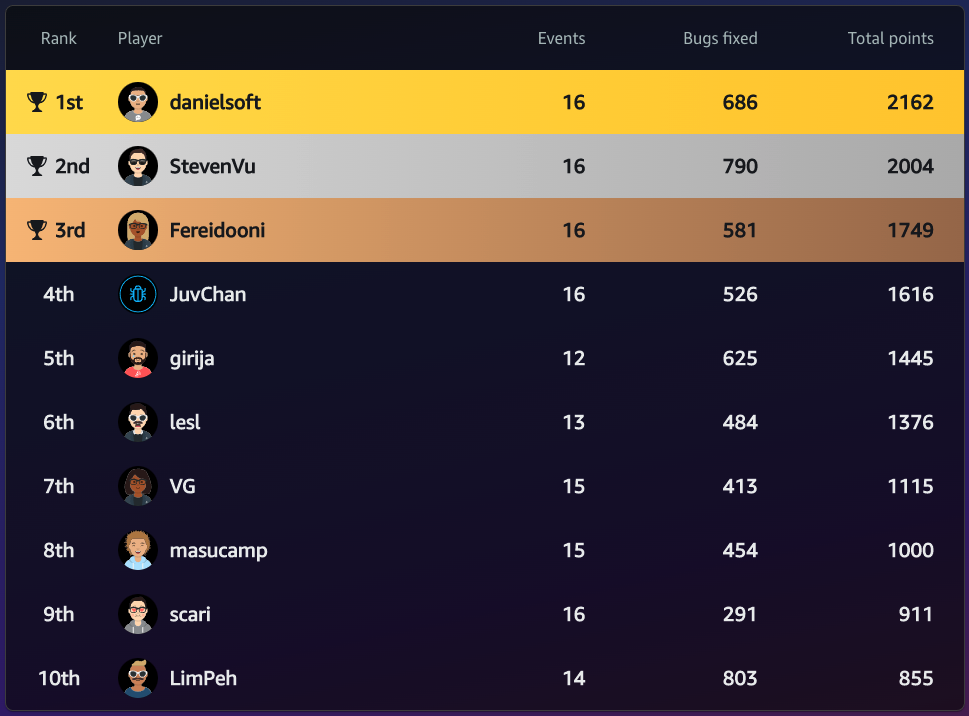 And do not forget that “A hundred cents makes a Dollar” → LimPeh proved that and got into the leaderboard on 10th place.

My achieved rank on the board during this challenge:

It is a fun challenge created as a game where everyone can participate – you don’t need to be a senior Java/Python developer to achieve the points during this event. Would be nice to participate this event the next year.

And do not hesitate to join this event – definitely you will gain the technical and some fun challenging experience, and maybe you will be the next Ultimate AWS BugBuster 🤩